This Midland Continental didn’t make it to the Gulf, but it does have track in Colorado

Independence Junction is rural by nature and busy by design. This wye is at the center of the core 180 mile “main line” of the Midland Continental, a regional railroad with real historical roots. Independence Junction is where the two daily through trains, powered by a pair of Alco C420s or RS11s, exchange cars and return to their home terminals with each crew picking up or setting off loads and empties and interchange blocks along the way. On the siding is unit grain train waiting for a track warrant to head to the Burlington Northern interchange some 45 miles to the north. This train, led by two RSD15s, picked up loads at one of the larger grain elevators on the line: the cars are destined for a Pacific Northwest export terminal. Later today a unit coal train of lignite coal will pass south through Independence Junction, going from an on-line mine in central North Dakota to an electric power plant in Fergus Falls, Minnesota. At the head end are two high nose SD35s. And, if you are lucky, you might see two RS1s moving a train of ballast. The railroad is upgrading track to handle higher axle loadings and higher speeds.

The Midland Continental Railroad is a prosperous, privately owned regional railroad whose history is based on a real railroad that had hopes of connecting Winnipeg to the Gulf.  The actual Midland Continental was organized to offer a north-south route as a grain funnel for export. Lacking serious investment, the Midland’s true mainline spanned 69 miles (all in North Dakota), connecting the Milwaukee Road at Edgeley, Northern Pacific at Jamestown, and Soo Line at Wimbledon. From World War I until 1966, the MICO was small but useful as a bridge route. In the 1950s, trains of 50 cars of were common, keeping the two RS1s busy. The privately owned Midland was sold to the NP and Soo in 1966. Spring flooding in 1969 washed out sections of the line and it was largely abandoned. That’s the hard and true history. 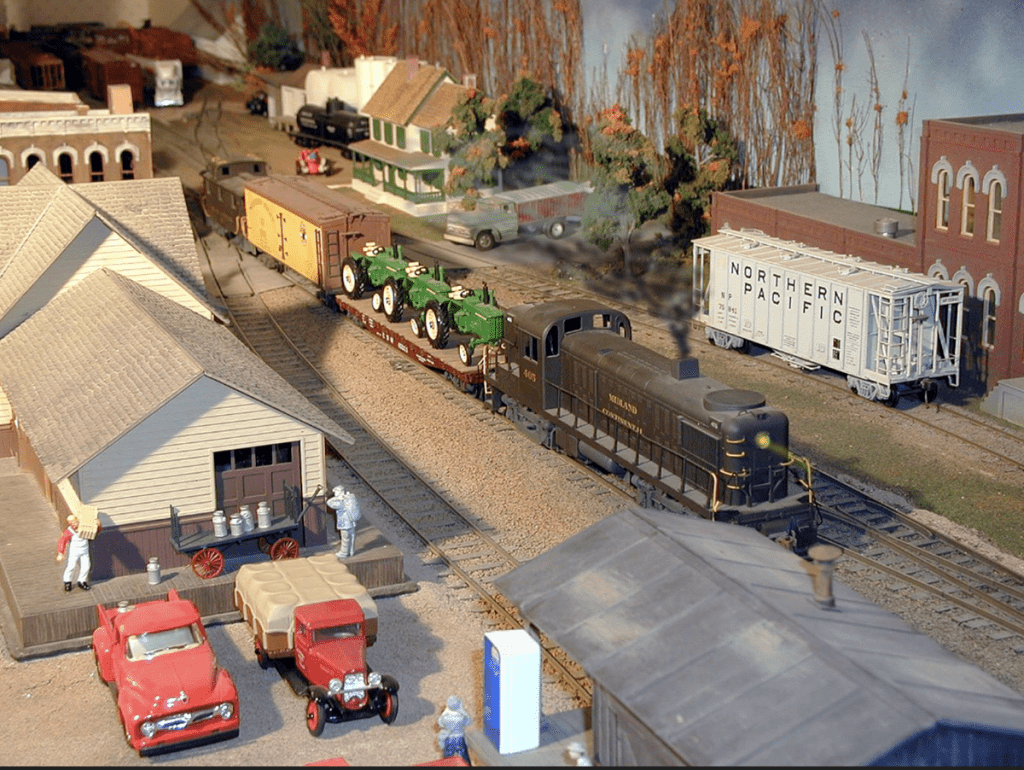 In the basement of Bob Kjelland, history takes a turn for the better, as the Midland remained privately owned, survived the floods, and soldiered on, still relying on Alco power acquired from the BN. In this new future, the Midland in 1984 acquired the 670 miles of BN track in eastern North Dakota that in the real world was spun off to the actual regional Red River Valley & Western. Bob’s version of future “history” presents the Midland as it was in October 1995. For railroads running through North Dakota, traffic ramps up during autumn. The layout represents a 90-mile section of actual track running from Carrington south through Jamestown to Independence Junction. Bob says to think of the Midland as the Green Bay & Western of the north: light in train count yet embracing a culture of hustle over the road.  A double deck layout will provide some five scale miles of track to simulate the operations. As a lone wolf operator, Bob enjoys walking with his train from point to point, switching grain elevators, fertilizer plants, cement facilities, and other prototypical shippers and receivers along the line.

The layout’s secondary purpose will be to provide an “east-west” double track continuous mainline with hidden staging around the walls to allow Burlington Northern (lower deck and Soo Line (upper deck) trains to run through scenes where the Midland parallels and interchanges with the bigger systems.

As scenery and buildings and track arrangements have changed little over the years, Bob will be flexible in backdating the layout when the mood moves him. to After all, when you have Northern Pacific diesel locomotives, an A5 4-8-4, and a Mainstreeter passenger train, you do want to create a moment in time for them to run. As a railfan, Bob likes the option of sitting back and railfanning in a setting that feels like the area he grew up in. Two stacked 6-track stub yards of approximately 24 feet will nestle between the backdrops on the lower deck “interior lobe” to allow for storage or staging. As these yard throats are connected to wyes, turning entire trains will be easy. Oh, for complication, the building codes here result in basement slabs and foundations being poured separately. This allows the basement floor to “float” should the bentonite clay swell with excess moisture. It also means the layout was designed to both float up to three inches and support the miniature world above. Currently, the lower deck benchwork, backdrop, and track is in the works, with the essence of the upper deck already visible. The layout occupies an area of roughly 950 square feet, with challenges caused by “basement wall bump outs” that required outside-the-box track arrangements.

There is a lot more to the story of the Midland Continental. Motive power, shippers, and traffic patterns all reflect historical reality, with a small measure of John Armstrong’s observation that it is okay to “improve reality” as necessary. This Midland Continental acquired line segments that give it modest reach into Minnesota and South Dakota. Visitors to the layout may find themselves asking “why?” and ‘how?” when it comes to design, construction, and operation. Bob hopes to have those answers well-rehearsed by the convention.

Fun Fact: Bob Kjelland brought his sectional O scale layout from North Dakota to the O scale National Convention held in Denver in 1994, where his trains ran flawlessly in the motel atrium. It was at that event that he met David Stewart. Little did either know that within a dozen years both would move to live within a four-minute drive of each other in Northern Colorado.

The Midland Continental does require navigating steps to a confined entry space and narrow isle ways.